Episode 80: Learning to Listen to the Person You Care For

Learning to Listen to the Person You Care For

Caregiving is like that gait belt they put around a patient in a hospital to get them up to walk around. It usually happens unexpectedly, causes way too much attention, and is the wake-up call that life continues no matter how you move forward into it.

If you haven’t had the pleasure of seeing the belt in use, I’ll explain. A gait belt will be used when a patient in a hospital is a fall risk and they need to transfer to the bathroom or a chair or even for a walk down the hall. It helps the nurse or therapist steady a person as they walk. The belt they usually bring to my husband’s room has always been pink so we call it the pink belt. From what I understand it comes in different colors it just always is funny for me (in probably a troubled caregiving way) that he has to walk with a pink belt on.

My first experience with this belt taught me a couple of lessons.

You can’t hide in bed forever.

Advocate with everything you have. Apologizing to a nurse later is better than having to live with a decision not to say something.

My husband’s surgery to remove his thyroid was a lot more complicated and took longer than expected. So it was easy to accept that we would have to stay in the hospital longer than we thought as well. He was in a lot of pain, in the beginning, he just didn’t want to move much. The huge amount of time under anesthesia was difficult for him to deal with after surgery and he just overall didn’t want to get out of bed.

Of course, that is what the doctors wanted him to do.

For the first few days, I was content to just sit by him while he slept. As time went on it became very clear that he couldn’t do that much longer. Plans were discussed with the surgeon each morning on what his goals should be. He listened and then did his own thing. I simply let things happen. I listened to the doctors and nurses. I listened to him and tried not to insert myself much. Maybe tried is too strong a word. I didn’t insert myself much because I was extremely tired and my brain wasn’t working to help make decisions at all.

I didn’t understand, before going into the hospital with my husband, that I needed the strength to be able to think while we were there. I could trust that the Doctors did what they needed to but I also needed to advocate for him, ask questions and try to understand the process since it was our first time.

So when staff started to ramp up the efforts to get him out of bed I didn’t take a side either way. I didn’t talk to him about the need for him to start moving and I didn’t explain to the nurses how horrible he was feeling and how much he didn’t want to move. What I did understand, after the second day, is that the sooner he walked the quicker we would get out. As scary as that really felt for me I just wanted to get him home and I wanted to sleep.

You Can’t Hide In Bed Forever

The day came for him to walk, it was in the plan for the day. The therapist was scheduled to come to help him and he still said that he wasn’t ready to walk. I suggested that he try. Later that day the young woman came to his room to help him walk and she brought the pink belt.

Now once we got him set up with the belt around his waist he negotiated to just walk to the door to start. He did that just fine. Then she suggested that he go out into the hall. He agreed but just to the next door. When he got there he said it was time to turn around because he wasn’t feeling well. She suggested he walk to the bench to sit for a bit. It was about 4 doors down the hall. I chimed in… well if he isn’t feeling well maybe we should turn around. She strongly suggested we walk to the bench and probably mostly out of frustration he agreed but added we might regret that decision.

The thing is I know and he knows that when he gets dizzy he will lay himself onto any cold surface available. It doesn’t matter if it’s the hallway of a busy hospital floor. I could tell his color had changed and I started talking to him a little more, asking questions to see if he was able to respond. Then I said … I think we need to turn around and when those words came out of my mouth he said “too late” and slowly made his way to the floor while the woman was trying to hold him up with the belt. If I weren’t a part of this experience I probably would have been laughing. As she tried keeping him upright with that pink belt he kept moving himself to the floor and in the end, he had enough leverage with the weight of his body to get him there. I just looked at her and said “You’re just going to have to let him go” and he just laid himself on the floor. Face pressed against the cold tile and me trying not to cry or laugh or react in disgust.

When my husband says he’s not ready for something he probably isn’t.

Now, to his credit, he warned both of us. He said he wasn’t ready and he actually wasn’t. Sometimes life just pushes you forward and you have to try it until you realize it wasn’t time and you lay on the floor.

He wasn’t upset about being on the floor. It was helping him feel better. What he was upset about was when nurses got him to turn over and there were at least 10 doctors and nurses standing around him in a circle. He simply looked at them and asked them to leave… he just wasn’t ready to walk and he got dizzy. He looked at me with his I told you so look which made me laugh. I got the message too late… he really wasn’t ready.

What happened next was the best part. Of course, someone brought a wheelchair to get him back to the room and he refused it. Now that he wasn’t dizzy anymore he just wanted to walk himself back and get into bed again. He could have let this be the thing that he would feel sorry for himself about. Walking down a hall with a pink belt and another person helping him do something he could do perfectly fine on his own before surgery only for no one to listen to him and to get so dizzy that he had to lie on the floor of a hallway only to alarm everyone there. I think if he could have he would have walked back to his room in a huff. Which was probably also frustrating because he still needed that pink belt and the woman to help him get back. That was him being resilient and is really how he continues to handle cancer in his life today.

Once he got back into bed and everyone left, we looked at each other. I laughed. He scoffed and then he went to sleep.

Advocate with everything you have. Apologizing later is better than having to live with a decision not to say something.

After that, I took what my husband needed a little bit more seriously when in a hospital. Of course, his walking plan wasn’t as enthusiastic the next day. They set smaller goals for him but for more times a day. I realized that I needed him to be able to walk when I got him home so I was more assertive in the amount of walking he needed to be able to do before taking him home.

I went back to being a caregiver, now that I think of it. The first couple of days I didn’t feel like I needed to be in charge of anything or make any decisions. I had checked out of the spousal caregiver role I didn’t yet understand I had taken and was just his wife for a few days. That was a great opportunity for us because we hadn’t had the time to just be a couple for a while. Of course, being hooked up to IVs and machines with feet of tubing in his neck isn’t very glamorous, but that didn’t matter. Just being able to be miserable together was a great way to bond.

He’s had over 9 cancer surgeries since his thyroid was removed. Each time the nurse or therapist comes to get him to walk I tell them with as much authority in my voice as I can… “when he says he’s gone far enough he actually has and if we push him too far he will end up on the floor because it’s happened before. We understand the importance of walking but he knows what his limits are and will tell us. We just have to listen.”

He hasn’t taken a break on a hospital floor since then. We both learned how important it was to use our voice. We also had our first hospital story. It was something we could laugh at later and one we like to share at times.

Thank you for listening to and supporting the podcast. If you enjoyed today’s show, please share it with someone who might benefit from listening to it.

I would be extremely grateful if you would consider taking a minute to leave an honest review and rating for the show in iTunes. They’re helpful when it comes to reaching other caregivers and I read each and every one of them personally! 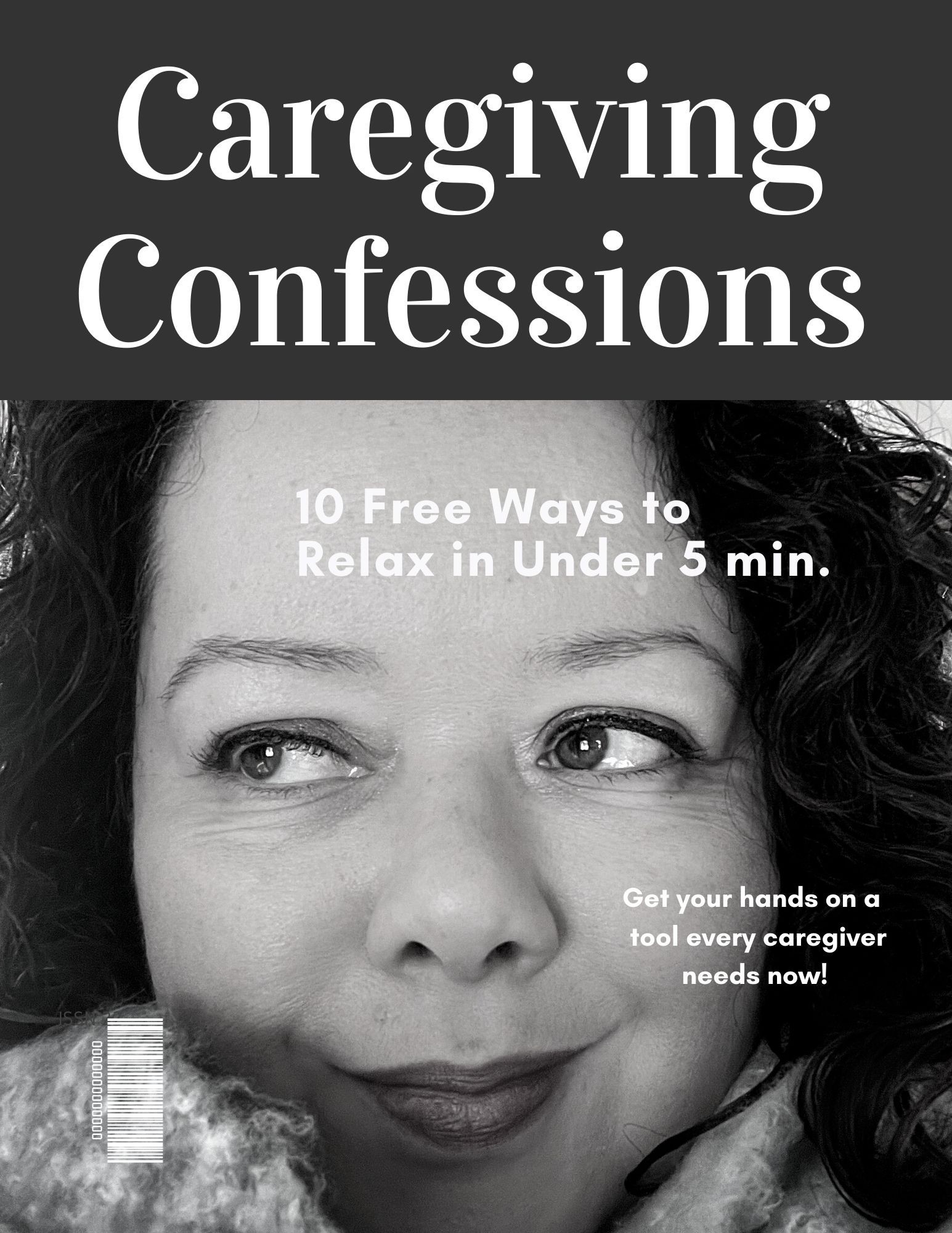 • How to Make Self Care Work for You

• A Tool Every Caregiver Needs Now

• A Playlist to Shake Your Cares Away